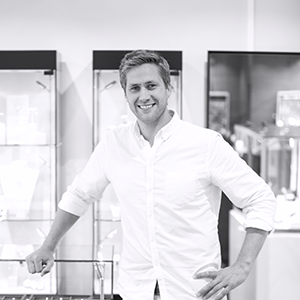 Per Ekenberg (1984) is a Swedish jewellery designer living in Stavanger since 2011. In order to realize his dream of creating jewelry,  Per chose to end his previous employment as a department manager at a recruitment company in 2016. Before entering the jewellery industry, Per designed various objects that are now represented around the Stavanger region, including a large stone monument at Stavanger and Airport trophies for international sporting events. Per Ekenberg's sculpture at Stavanger Airport

Per grew up in Ludvika Sweden, a small town a couple hours north and west of Stockholm., where he lived until he was 20. He was an athletic teen, participating in various sports, including ice hockey and football (soccer). In addition to sports, he was interested in creative pursuits and entrepreneurship. Already as a young man, he took on small projects to earn his own money. Per has, on several occasions after finishing primary school, traveled to Norway to enjoy the Norwegian nature and working to build up his savings, making it possible for him to live his dream today, designing jewelry fulltime.

Unlike his parents: his father a was doctor and mother a teacher, he wanted to find his own way in life. After completing his Bachelor's Degree in Human Resource Management from Örebro University, Per worked as a headhunter in a Nordic recruitment company.  After six months, Per received the offer to move to Stavanger, Norway to build up the company's operations aimed at the oil industry. With his previous positive experience from Norway, Per and his wife chose to settle there.

Early on, Per found inspiration in the Norwegian fjords and surrounding landscapes, namely the internationally renowned Pulpit Rock outside Stavanger. He wanted to change the view of the Pulpit Rock from a ”tourist thing” to something exclusive. With that in mind, he created his first jewellery collection, Pulpit Rock. Per decided to design a jewellery collection with a minimalist and exclusive expression. To maintain the impression of high end products, Per chose to produce his jewellery in 18k gold in addition to silver.

Right from the start, Per established a close collaboration with the well-known goldsmith Otteren Gullsmed & Urmaker in Stavanger. This gave Per the conditions to practice his design together with experienced goldsmiths, upholding long-standing traditions.

Per's jewellery is characterized by a minimalist design.

"My vision is to highlight the Norwegian craft tradition and communicate the grace of the Scandinavian scenery in timeless and minimalist designs.

By designing timeless jewellery of the highest quality, you contribute to a long-term usage  and a more sustainable consumption."

Since starting Preikestolen Design, his work has received increasing recognition. Per has, on several occasions, been mentioned in the media. He has also participated on a committee for international architectural competitions where the task was to build a spiritual room on the legendary Pulpit Rock.