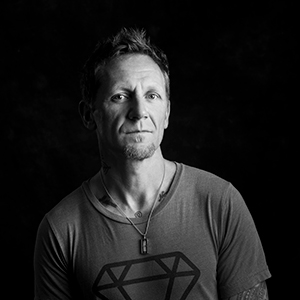 "Art enables us to find ourselves and lose ourselves at the same time. : Thomas Merton"

Finding his way to jewelry design on a long road with many twists and turns, Andre Normann’s jewelry takes inspiration from that journey mixed with inputs from the present day.  Born in Fredrikstad, Norway in 1979 as the youngest of three siblings, his father was an auto mechanic who enjoyed woodworking in his free time and his mother a nurse who enjoyed decorating and handicrafts in her spare time. André spent a lot of time with his father in the basement workshop, learning attention to detail, woodworking tools, and the nature of materials.  From a young age, his creative talents were evident, drawing highly detailed pictures.

However, school was not his thing and it was a struggle to focus on lessons and schoolwork. Bored, he channeled his restless energy into playing the guitar and joined a band, playing metal and rock music. Graduating high school in 1995, he took a job at a music store followed by a pet shop. With life moving sideways and still restless, in 2007 he decided to embark on a spiritual journey, taking a series of trips to Southeast Asia, mainly Thailand. Becoming a Buddhist, his perspective on life completely changed. Returning to Fredrikstad in 2013 he could not see himself working in a pet store and needed to do something different. He gathered some simple tools and started making jewelry.

Observing his works and commenting that he was better at jewelry design than playing the guitar, a friend from his former band encouraged him to look at Plus Skolen (jewelry and goldsmith college in Fredrikstad).  He enrolled in 2014.  At Plus Skolen he finally realized his calling in life. Focused and learning about things that he enjoyed (tools, materials, techniques), André received good grades and finished towards the top of his class. After graduation in 2016, he took a loan and started his own studio.

Inspiration not only comes from his life journey but also as spontaneous flashes, seeing a picture in his mind that he must create. It happens during sleep, meditation or even while working on another piece. He listens to a variety of music from progressive rock, metal to classics like Bach, Beethoven and Mozart. He likes relics that are old and worn. Enjoying science fiction and television documentaries, it is evident that creative stimuli are a combination of the past and present. The creative process is about tapping into the mind when it's in a certain place: "in the zone."  Once there he can create things never seen before.

Specializing in one of a kind kinetic jewelry, his works have many details and moving parts.  He enjoys experimentation and working with many different tools and techniques, sand-casting among them. His works are edgy and some have a Gothic and steampunk quality to them. Others are contemporary and modern, meant for placement in an urban art gallery.

Today he balances his life with a family, married with two children.  His works are available online and at his studio in Gressvik, Norway.

2017 - Norwegian Art Exhibition, accepted on first application, which is a remarkable achievement for a newcomer.